As a young single man, straight or gay, it’s tough to decide whether you want kids or not. You might think making the decision is tough, but the process of becoming a parent is even tougher.

Even though being a parent can be rewarding and being responsible for life is heartwarming. But for single men, the process can be very overwhelming.

There comes a time when every option for having a baby of your own seems to be closing. That is when surrogacy seems like the best option for single men no matter straight or gay.

Deciding on surrogacy is a great first step for you. Now, it will take a lot of research and hard work to add that special little member to your family. Deciding to become a surrogate father is a big decision.

What Do You Mean By Surrogacy?

Surrogacy is a legal arrangement for a woman who is willing to carry a child till full term for another person or people. Those people will become the parents of the newborn child and not the woman carrying the child.

How Does The Surrogate Process Work?

There are ideally two different ways to about the surrogacy process, the Traditional way and the Gestational way.  In terms of simplicity and less complexity, the gestational process is much more popular and common.

Through the Gestational process, the embryo is created using  IVF technology, which is then implanted inside the surrogate mother. In the case of an intended single father, the sperm of the father will be mixed with a donor’s eggs.

Single men prefer to provide their own sperm so that the newborn baby has some of his qualities. But men who are infertile have to use sperm donors for the process.

But before we talk about the IVF process, you have to make a few important decisions beforehand. Such as the cost of surrogacy, the few legalities, and also you need to choose the best agency for you among many.

The cost of surrogacy is considerably high; it can be over $100,000 in certain high-end agencies. Then considering the prices, you have to do deep research on the best surrogacy agencies around you that suits your needs.

The Pros And Cons Of Surrogacy For Single Man

Surrogacy is a process mostly used by celebrities because it is expensive, which is it is not a very mainstream concept. But since it is slowly becoming more and more popular, people are becoming aware of it.

And for single men or gay surrogate spouse wanting to become parents, it is the best way to go. There are both pros and cons of surrogacy for single men such as.

One of the biggest reason by single men chooses surrogacy is because they are the one who donates the sperm, which makes the child biologically theirs. And since the surrogate mother has no biological ties with the child, the father has full legal custody of his child.

And another reason why surrogacy is the right way to go for intended single fathers is that the waiting period for surrogacy is quite less. Unlike in adoption, where you have to wait for a long time before someone chooses you, which is harder for single men.

But if you really want a baby, you will overcome all these hurdles that are what is a surrogate father means.

While there are a lot of pros to single men choosing surrogacy, the cons are also there. The biggest con of all is the cost of surrogacy, which might exceed your overall budget. And taking out hefty loans is a lot for single men.

Also, there are added controversies regarding single men becoming fathers, which need to be normalized. As a single man, you might also find it difficult to find the agency that suits your needs the best. And also a surrogate mother who would agree to carry your child.

There are a lot of old fashioned people who think single men and gay couples going for surrogacy is unnatural and selfish. They even argue that it is harmful and unfounded for them to pursue surrogacy.

But these controversies and superstitious arguments are always going to be the same. You have to choose to avoid all this negativity and look at the positive side of things and for the new one to arrive in your family.

Now that you know the process of becoming a surrogate father if you have any more questions, here are a few asked by others.

1. How Do I Become A Father Through Surrogacy?

Ans: If you want to have a baby, then a single intended man can easily donate his sperm and get an egg donor to make a baby using a surrogate.
The following process is the same through IVF. The fertilized embryo is then planted inside the surrogate mother for her to carry to full term.

2. How Much Does A Surrogate Cost For A Single Dad?

Ans: Surrogacy is an expensive procedure. For one child, the cost is more than $100,000. These costs are something to consider before becoming a surrogate father.

3. How Single Men Can Have Kids?

Ans: Single men who want to experience parenthood can easily opt for surrogacy by donating their sperm and an egg donor. Through surrogacy, the biological similarities and connections still remain between the parents.

Bringing a child into this world who is yours is a feeling no one can express in words. The feeling of fatherhood is something you need to experience to express. And through surrogacy, you can have that genetic connection that you are moving your bloodline ahead.

And surely it is going to be hard; you have to turn a deaf ear to all those criticisms regarding surrogate fathers. There will always be someone criticizing everything you do; if you listen to them, you are depriving yourself of happiness.

Nabamita Sinha
Nabamita Sinha loves to write about lifestyle and pop-culture. In her free time, she loves to watch movies and TV series and experiment with food. Her favorite niche topics are fashion, lifestyle, travel, and gossip content. Her style of writing is creative and quirky.
Previous

15 Things Dads Can Do To Give A Happy Childhood 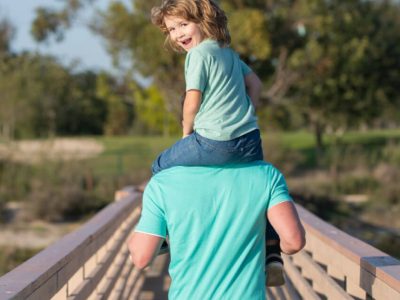 15 Things Dads Can Do To Give A Happy Childhood

The Rights of a Birth Parent After Adoption

“I Don’t Know How To Make Mom Friends.” Relax, You Aren’t Alone!

What It’s Like To Be A Lesbian Mom? 10 Things To Experience

Nanny Vs Babysitter: who should you choose?